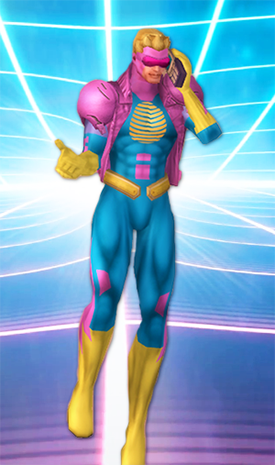 In 1987 San Benardino, California, slacker Bradley Barnhart spent most of his time goofing off, playing video games, and practicing skateboarding instead of preparing for his future after graduating high school. After getting into an argument with his parents and girlfriend over his immature nature and lack of ambitions, Brad ventured out to his favorite field where he spent most of his time firing off bottle rockets and other dumb stuff.

He lay on the hood of his Corvette, gazing up at the stars when he spotted what he thought was a shooting star, until he realized it was getting bigger. Racing closer and closer, the flaming object fell from the sky headed straight for him. He managed to slide off the hood just before the shape came crashing down onto his car, totaling it. As the smoke cleared, Brad approached the mangled automobile and was shocked to find a man sprawled out atop the wreckage. Though he appeared unhurt, his futuristic silver garb was tattered and in flames.

As he was surely dead, Brad approached the prone figure but was shocked when his eyes snapped open and he grabbed the lapels of his leather jacket and pulled him close. He revealed his name was Andros Bann and he was a time traveler from the year 3000, tasked with protecting The Eternity Band, an object of immense power. Mortally wounded in a fight with an intergalactic conqueror named Abbezar, Andros tasked Bradley with returning the band to an organization called The Time Corps for safekeeping. Then he died.

Moments later, before he could even process all the information he was provided, a swirling portal appeared. A hulking brute, who Bradley could only assume was Abbezar, stepped through the portal, demanding the band. Bradley slipped the band on his wrist before he did what any sane person would do. He ran.

Abbezar gave chase and wishing he was anywhere but there, Bradley was shocked for what must've been the tenth time in five minutes when another portal opened in front of him. Before he could stop short, he stumbled, tripped, and fell forward through the portal and was catapulted through a disorienting and kaleidoscopic tunnel of swirling colors, landing in the present day Paragon City.

Now stranded in the present, Brad's decided to blend in and make a little money by becoming a superhero, while also searching for The Time Corps, which is difficult, seeing as they don't exist yet.

Throwback derives his abilities from The Eternity Force, an extradimensional cosmic energy field that he can access to grant himself a number of superhuman abilities.

Time Manipulation: Throwback is able to channel the Eternity Force to mentally manipulate the time in the general area or a specific target in various manners, including accelerating, slowing, stopping and even rewinding or looping time.

● Time Travel: The Eternity Band bestows the wearer with the ability to travel backwards and forwards in time, but Bradley has yet to master this power and is currently stuck in 2020.
● Localized Time Manipulation: Throwback can slow down the movement of time around himself and remain unaffected by the slow down. This makes it appear as if he is moving at superhuman speeds. He is able to slow down and stop objects entirely, enabling him to freeze projectiles in mid-air or place his enemies in temporal stasis.

Pulse Blasts: Throwback is able to summon cosmic energy and project it in the form of concussive blasts or waves. The blasts themselves pick up kinetic energy; so the farther they travel, the harder they strike. 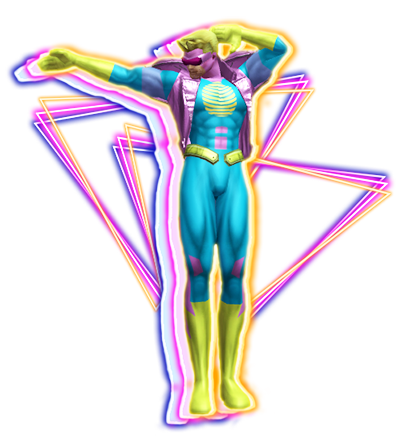 The Eternity Band: A sleek, silver band that's worn on the wrist, The Eternity Band is a high-tech device, created in the distant future that allows the wearer to access and harness The Eternity Force. The band draws energy from "The Realm Eternal", a dimension of limitless temporal energy. The Band can bend light around itself to appear invisible or take the form of other objects. When Brad is dressed casually, it appears as an ordinary wristwatch.

● Enhanced Durability: The Eternity Band projects a thin force-field that allows Throwback to resist physical and energy attacks. The force field centers on his body, but can expand and even project outwards.
● Flight: The Eternity Band emits an anti-gravity field around its wearer that grants levitation and subsonic-speed flight.

Dependence: Bradley is completely reliant on the Eternity Band. Without it, he is an average human being and unable to access and channel The Eternity Force.

The Eternity Curse: Wielding such power comes at a price - the longer one wears The Eternity Band, the longer they live, which means, barring any fatal inuries or illnesses, the wearer will eventually stop aging, essentially becoming immortal.