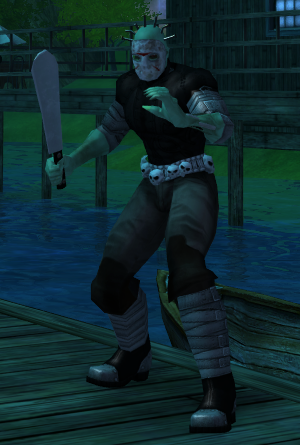 Mason Pflueger spent most of his life being heavily doted on by his overbearing single mother, Madelyn Pflueger. From a very early age, Mason showed a propensity for violence and aggression that she sought to stamp out through her own nurturing. As impossible a task as it was, she never stopped trying; deep down she could always see the evil inside her child, and it scared her.

Madelyn was right to be scared. Almost as soon as he could walk, he developed the gruesome hobby of murdering animals, which his mother found herself quite adept at cleaning up and keeping hidden from other people. As Mason grew older and he transitioned from small animals to human beings, she found herself just as skilled at covering up a homicide. She knew it was wrong, but she convinced herself she was helping the situation. She was wrong.

Eventually, Madelyn decided to move Mason away from their suburban home to a secluded estate overlooking a lake in the New England mountains, thinking it to be the best way to keep people safe from Mason as his blood lust continued to grow. Unfortunately, all this did was direct his murderous gaze towards Madelyn herself. After a brief period of having no one to kill, Mason finally attacked her.

Madelyn, however, was prepared. After a nightmarish confrontation between her and her son, she ended up killing him that night in self-defense with a nail gun to the head. When it was over she turned herself into the police for killing Mason, and she confessed covering up years of unsolved murders that happened by his hand. Their story would end up becoming a national sensation, and Mason would become infamously nicknamed Slasher by the media. The lakeside Pflueger home became condemned, and Madelyn was sent to serve a lifetime in prison for her role in her son's crimes.

Unbeknownst to the rest of the world, Mason's malevolent, disembodied spirit lingered at the estate long after it stopped seeing regular visitors. His black, corrupt soul refused to cross over into the afterlife because of his undying desperation to kill again. Being a ghost, he was unable to manifest in the physical realm to satisfy his urges for decades, the frustration of which warped Mason's mind beyond repair. For years, Mason waited for a chance to make his dreams come true.

When the Pflueger home was put up for sale, it finally happened. By some cursed stroke of fate, the Satanic rockstar Judas stopped by the property to scope it out as a potential venue for one of his shows. Unlike all the other visitors Mason encountered, Judas was the first who could see and interact with him. As a fan of the infamous Slasher's gruesome tale, Judas agreed to help Mason get in touch with someone who could definitely get Mason back in the killing game once again: The Dark Lord Satan himself. Whatever Satan demanded in return, Mason was willing to provide.

The terms were simple: every night, Mason can manifest physically anywhere on the Pflueger property. Anyone who sets foot on the Pflueger at night must die by sunrise. If he is successful, his victims' souls will be claimed by Satan, forever damned to eternal hellfire. If anyone survives until the morning and he fails, then his victims' souls are unable to be claimed, and they get returned to life. After thirteen souls are claimed, Mason will be freed from the binds that keep him confined to the land he currently haunts; he'll be able to leave, spreading his terror wherever he pleases.

The Pflueger property ended up being sold to someone who wanted to turn it into Camp Hardwood, a fitness camp for overweight children. Though Mason was eager to turn the night of the move-in into a massacre, his Satan-empowered presence drew the attention of both Limbo and the Occultist, who brought the Vanquishers up to Camp Hardwood in an attempt to exorcise Mason from it before opening day. Though he did manage to kill several of the heroes, a few survived,so they all were resurrected at sunrise. Occultist magically sealed away Camp Hardwood, preventing anyone else from crossing paths with Slasher until the heroes could find a way to send him to hell for good.